My research interests primarily focus on investigating the interstellar-medium and how that relates to the properties of galaxies (for example star-formation). In particular I often work with dust, which has traditionally been seen as a nuisance to astronomers as it absorbs the light emitted by stars. However, by absorbing the energy from the UV/optical photons, the dust heats up and emits light in the far-infrared. Over the history of the Universe ~50% of the light from stars has been absorbed and then re-emitted by dust. An example of the existence of dust that can be seen with the naked eye (from a dark site!) with the dark dust lanes seen towards the centre of the Milky Way. 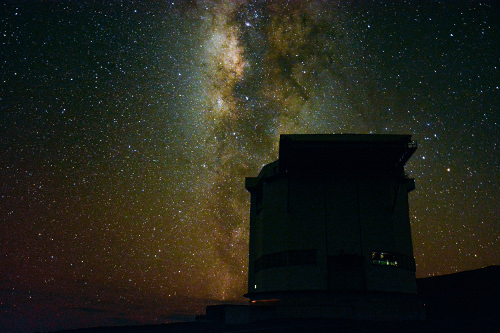 The view of the Milky Way from Hawaii taken with my SLR camera. The dark features are from clouds of dust which absorb the light from stars. In the foreground is the JCMT which measures the heat given out by dust in the sub-millimetre.

My research is primarily focused on nearby galaxies, where the proximity gives us the most detailed view of the processes (like star-formation) occurring inside a galaxy, but unlike studies of the Milky Way we can obtain a complete census of the galaxy as a whole. By understanding relations in the local universe, we can help improve our understanding of systems at much higher redshift.

I'm part of the extra-galactic research group at Cardiff University where I did my PhD and am now a Post-doctoral researcher. My PhD thesis was titled "The Herschel Perspective on Galaxy Evolution" (available here) focused on using results from the new Herschel Space Observatory. Below I've outlined some of my research interests, from analysis of Andromeda to dust in Early-Type Galaxies. Click on any of the images/figures to enlarge and find out more about them.

The Need for Far-Infrared/Sub-mm Data

While I use data at all wavelengths from UV to radio, a lot of my research is focused on using far-infrared to sub-mm data. But, why are measurements of dust so important? Here are just a few examples of why this data is useful:

Resolved studies of nearby galaxies are crucial to understanding several open questions in astronomy, like how dust varies in a galaxy?, is there a very cold dust component to the ISM which hides a large quantity of the dust?, what is the relation between dust, gas and metals? or how do the conditions in the ISM effect the star-formation process? Nearby galaxies also give us the opportunity to understand how large-scale properties of the galaxy (like stellar-mass, the galaxies environment, etc...), affect the processes that occur on scales of giant-molecular clouds. 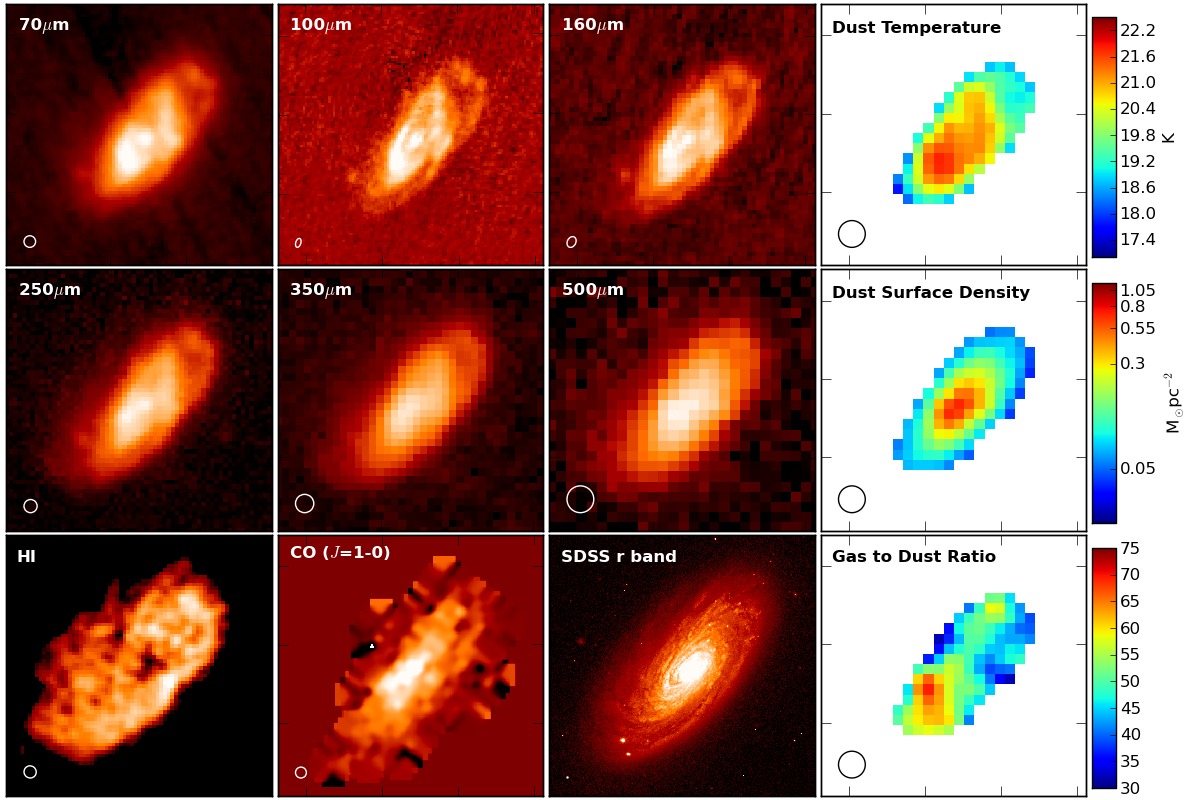 Far-infrared and Dust SED results Smith et al. 2010. Studies investigating how dust changes throughout a galaxy have traditionally been very challenging due to a lack of resolution at sub-mm wavelengths, a wavelength range only sensitive to warm dust (< 160µm), or lacked sensitivity. The Herschel Space Observatory revolutionised the field, with the largest mirror in space (until JWST launches!) it had remarkable sensitivity, and its two cameras (PACS and SPIRE) observed both sides of the SED peak (70-500µm). I undertook the first pixel-by-pixel dust analysis using the first data from the Herschel Virgo Cluster Survey (Smith et al. 2010). I created maps of dust surface density, temperature and gas-to-dust ratio for three galaxies, by fitting modified blackbodies to the spectral energy distribution (SED) for each pixel.

The figure shows the results of the SED fits, showing dust temperature, dust surface density and the gas-to-dust ratio. I found that the while the distribution of dust mass is symmetrical and peaks in the centre of the galaxies, while the dust temperature varies in the range ~19 - 22 K and peaks away from the centres of the galaxies. However, due to the angular size of the objects/resolution of Herschel we were limited by what we could learn, to get a more detailed understanding we had to switch to much closer galaxies.

In December 2010 we obtained observations of Andromeda, the nearest Milky-Way like (?) galaxy, as part of the Herschel Exploitation of Local Galaxy Andromeda (HELGA - one of the more contrived acronyms!). We took observations in parallel-mode observing simultaneously at 100, 160, 250, 350 and 500µm. Our image at 250µm which was first shown live on Star Gazing Live is shown below:


This not only provided a great publicity image but allowed us to analysis the properties of dust in the closest Milky Way like (?) object. To analyse M31 in Smith et al. (2012) we took a very conservative approach by smoothing and re-gridding all the images to match the 500µm images; this still left us with ~4000 quasi-independent pixels! The results of the SED fitting can be seen in the figure below. 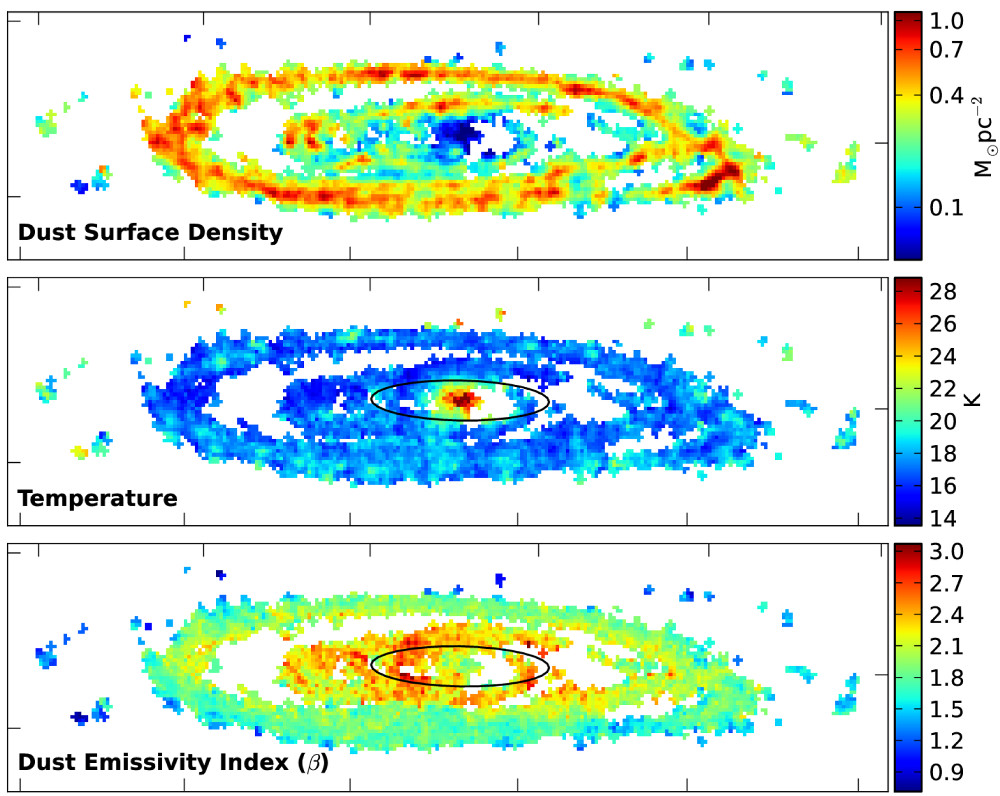 The distrubtuion of dust surface-density, temperature and β in M31; Smith et al. 2012. When fitting the SEDs I found the surprising result that a single dust emissivity index (β) does not fit the data, instead this had to be left as a free parameter. This was the first extragalactic evidence from dust-emission that the properties of the dust varies within a galaxy. The radial variation of β that I found could possibly be explained by variations in dust grain sizes, mantle growth, or composition of the dust. Unfortunately we were unable to identify which of these processes is causing the variations we see.

I also found that the old-stars in bulge can heat the dust to a lot higher temperatures (~30K) than is seen typically in the disk (~17K), just due to stronger interstellar radiation field from the density of stars. I also attempted to detect 'dark gas', that is molecular gas not traced by the usual CO tracer. Our search did not reveal a detection, but we were able to measure the CO to H2 conversion factor (X-factor) as 1.9 ± 0.4 cm-2 [K kms-1]-1. To see the complete results from the SED fitting paper click here.

The HELGA survey has so far written seven papers based on the Herschel data. One science highlight by George Ford investigated the Schmidt-Kennicutt law in M31 and found that like other nearby galaxies investigated by the HERACLES survey that the surface-density of star-formation is best correlated to the surface-density of molecular gas, rather than atomic or total gas. Unlike the HERACLES team though instead of finding a power-law relationship with N~1, we find a much lower value of N~0.6. The figure on the left below shows the resolved Schmidt-Kennicutt law. Another interesting result by Sébastien Viaene (shown below on the right), is that individual regions of Andromeda lie on the same global relations as found by the HRS sample of nearby galaxies.

The Schmidt-Kennicutt Law in Andromeda. The figure is taken from Ford (2014).
Comparison of global relations in Nearby Galaxies and individual regions in Andromeda. Figure taken from Viaene et al. (2014)

To make significant progress in the future we need to get data at longer wavelengths and higher-resolution. To address this I am leading a new large program on the JCMT called HASHTAG, to map the whole of Andromeda at 450 and 850µm with SCUBA-2. With this data and new SED-fitting techniques we will be able to map the dust with 25pc resolution. For more details about this project see my HASHTAG page.

The traditional view of early-type galaxies (ellipticals and lenticulars) is that they are 'red and dead', i.e., they have old stellar populations, and have little or no interstellar medium/star-formation. The figure on the left shows this 'typical view', with the large elliptical galaxy showing no sign of dust in the Herschel image, while the smaller blue spiral galaxy contains large amounts of dust. Using the Herschel Reference Survey (HRS) I undertook a study of Early-Type galaxies with Haley Gomez and Steve Eales. With ~60 early-types this was the largest targeted survey of ETGs undertaken with Herschel (Smith et al. 2012). 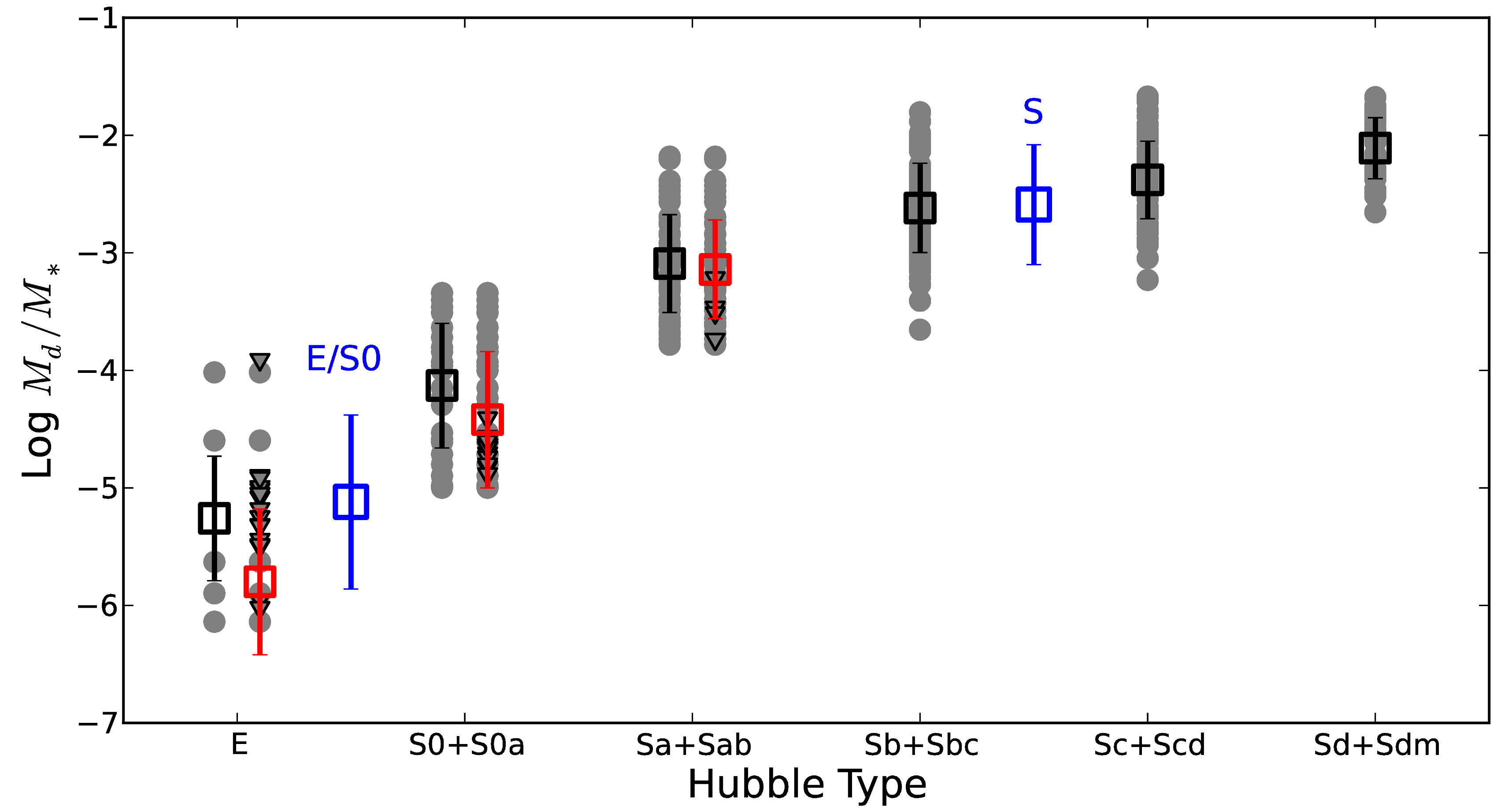 We found that we could detect dust in 50% of early-type galaxies (ETGs) with Herschel, proving that many ETGs contain a cool interstellar medium, although at a lower levels than spirals. The 50% detection rate is significantly higher than Hi and CO surveys of the same objects in the ATLAS3D survey. We found an order of magnitude decline in the dust-to-stellar mass ratio between spirals and lenticulars and then a further order of magnitude decline to ellipticals (see Figure on right).

Dust in the Extreme Outskirts of Galaxies 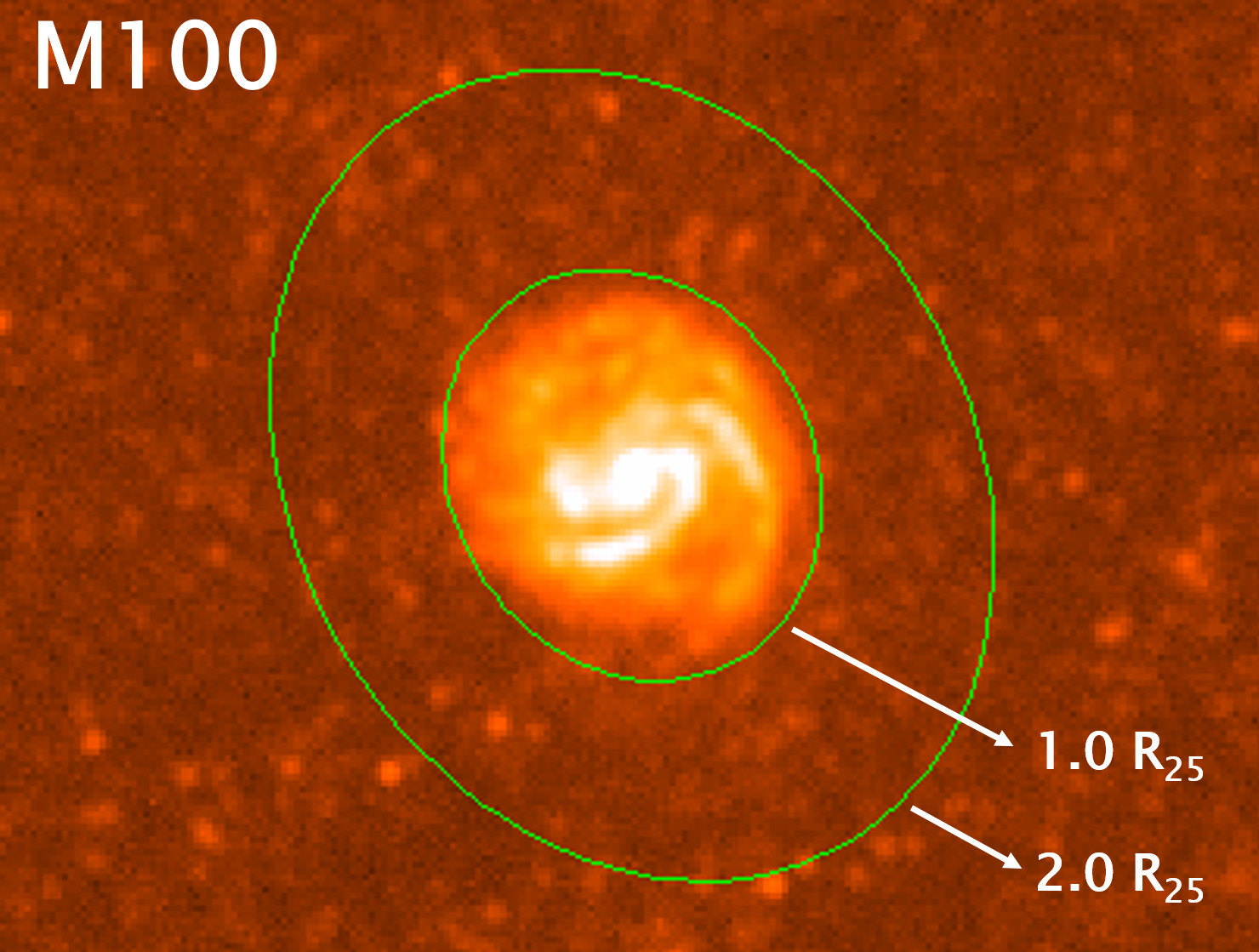 While writing up my PhD I noticed several Herschel surveys had the aim to detect hidden resevoirs of cold dust (< 15K), possibly in the outskirts of galaxies. However, no team had published any results finding any dust in the outskirts galaxies. The reason is easy to see why, on the right is the SPIRE 250µm image shown on a log scale. The inner ellipse shows 1×R25 which visually appears to contain all the sub-mm emission from the galaxy.